Demetrio Paparoni brings his creative expertise and vision to Glasstress 2011. Here, he explains the undeniable ties between art, architecture, and design.

Demetrio on Glasstress 2011
The theme of this year’s exhibition is the complex relationship that ties art, design and architecture together in an age thought to have moved beyond modernism. Comparing the opinions of various curators, Glasstress addresses this issue through glass sculptures specially made by major artists on the contemporary scene and through objects and sculptures made by designers, whose research was influenced by the formal aspect of the use of the object.

Putting glassworks that respond to such profoundly different concepts next to each other in the same show is the equivalent of reviving critical issues that are far from resolved: What makes an object that is formally conditioned by its function a work of art? To respond to the spirit of the time, must a work refer only to itself? Can we say today that the function of a design object is itself enough to make the work alien to the spirit of the time regardless of its formal qualities? These questions, which are the basis of the 2011 Glasstress project, call into question the notion of “art for art’s sake” so dear to the 20th century avant-gardes.

Glasstress 2011 offers the viewer food for thought about complex themes. It poses the need for a critical reassessment of the main tenets of modernism, the majority of which were still very much present in the art of the eighties and questioned in the next decade by the second generation of post-modernism. Glasstress 2011 demonstrates just how topical these themes still are and the need to explore them further.

Demetrio Paparoni was born in Siracusa in 1954. He lives in Milan. An art critic, essayist and exhibition curator, he is the author of monographs and books on contemporary art theory. In the early 1980s he created the Tema Celeste magazine, which he directed until April 2000. He was, among other things, commissioner for the Italian pavilion of the Venice Biennale in 1993. He taught the History of Contemporary Art at the Faculty of Architecture in Catania from 1996 to 2008. 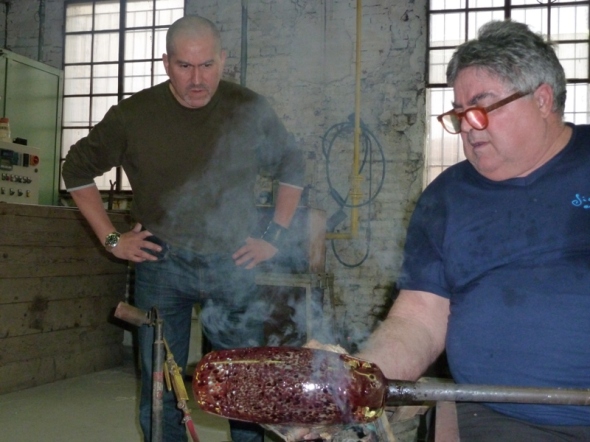 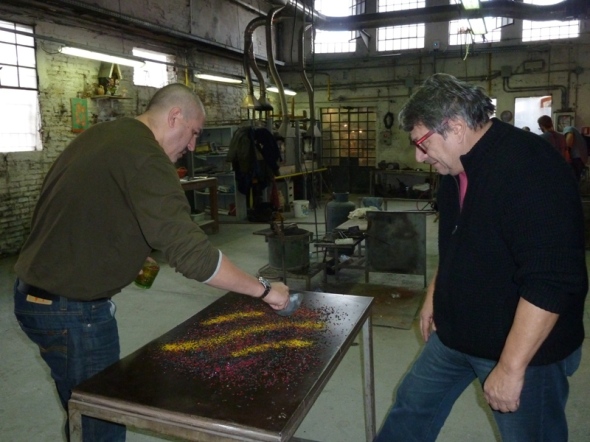 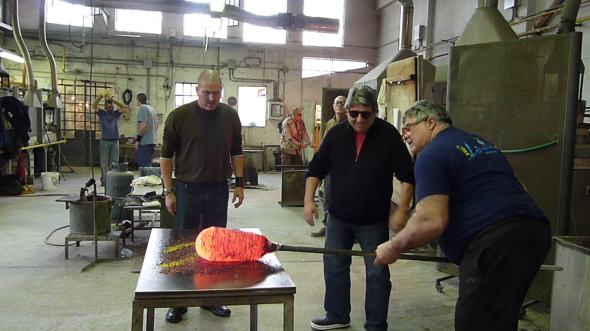 Glasstress 2011 artist, Michael Petry is an internationally exhibited multi-media artist, and co-director of the Museum of Installation, London. He was born in El Paso, Texas, and has lived in London since 1981. He received a BA at Rice University (Houston), an MA at London Guildhall University, and is finishing his Dr Arts at Middlesex University. He lectures part time at the Royal College of Art and the Royal Academy Schools and was Guest Curator at the KunstAkademi, Oslo, and Research Fellow at the University of Wolverhampton. Petry is represented by the Sundaram Tagor Gallery, New York, the Devin Borden Hiram Butler Gallery, Houston and the Westbrook Gallery, London.

Petry is the Director of the MOCA, London Museum of Contemporary Art, and the curator of the Royal Academy Schools Gallery. In addition to temporary exhibitions and installations at several museums and galleries, such as the Devin Borden Hiram Butler Gallery, Houston, Petry’s works are included in public collections throughout the world including the Museum of Arts and Design, New York; Museum of Fine Arts, Houston, the Toledo Museum of Art, the British Museum, London; The National Collection, UK, the Kunst und Ausstellungshalle der Bundesrepublick Deutschland, Bonn, the Bellerive Museum, Zurich, The New Art Gallery Walsall, UK, Rogaland Kunstmuseum, Stavanger, Norway, The Gallery of Art, Legnica, Poland and the Leopold Hoesch Museum, Duren, Germany

The central image of the show is of Prometheus, bound and suspended high above the stage throughout the full 90-minute production. Symbolizing the artist bound by society’s contradictions: freedom of expression versus obedience to order, Prometheus, the bringer of fire to man, is also a symbol of creation and destruction. The story was concieved, co-written, and directed, and set directed by Fabre.

Jan Fabre (born 1958, Antwerp, Belgium) is a Belgian multidisciplinary artist, playwright, stage director, choreographer and designer. His decoration of the ceiling of the Royal Palace in Brussels Heaven of Delight (made out of one million six hundred thousand jewel-scarab wing cases) is widely praised. In 2004 he erected Totem, a giant bug stuck on a 70 foot steel needle, on the Ladeuzeplein in Leuven.

This makes us smile. 🙂

Earlier this week in Murano, we had an incredible visit from prominent Lebanese painter, Nabil Nahas. Nabil grew up in Cairo and Beirut, moved to the United States to study and earned his MFA from Yale University. Encounters with contemporary painters at Yale influenced Nahas to move to New York where he has exhibited regularly and received critical acclaim for his work. Nahas uses geometric motifs and decorative patterns inspired by the rich history of Islamic art. At the same time, Nahas is thoroughly educated in the tradition of Western abstract painting. These two poles combine quite provocatively in his work, seamlessly fusing into brightly-colored paintings suggestive of the richness of nature. In his most recent work, Nahas surprisingly introduces recognizable forms of cedar, pine and olive trees native to Lebanon, his most direct reference yet to his native land. His retrospective, Nabil Nahas: Perpetual Energy opened this summer is the inaugural exhibition at the Beirut Exhibition Center, an exhibition created by eminent American art critic Vincent Katz and sponsored by Solidčre.

Nabil’s recent visit to Berengo Studios to create his works for Glasstress 2011 was also the artist’s first time creating works in glass. We are lucky to have his debut exploration in a new medium and proud that he, along with Marya Kazoun, will represent Middle East excellence at the exhibition. 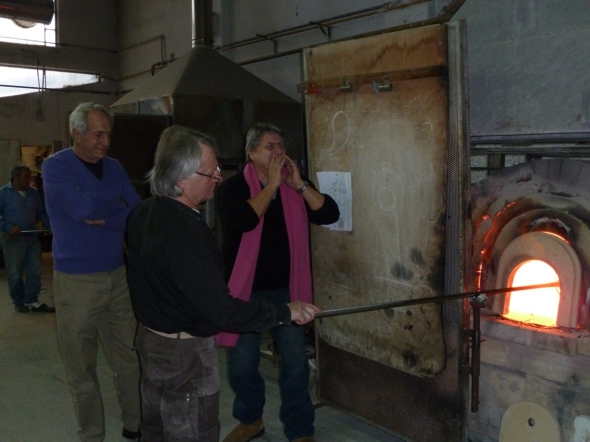 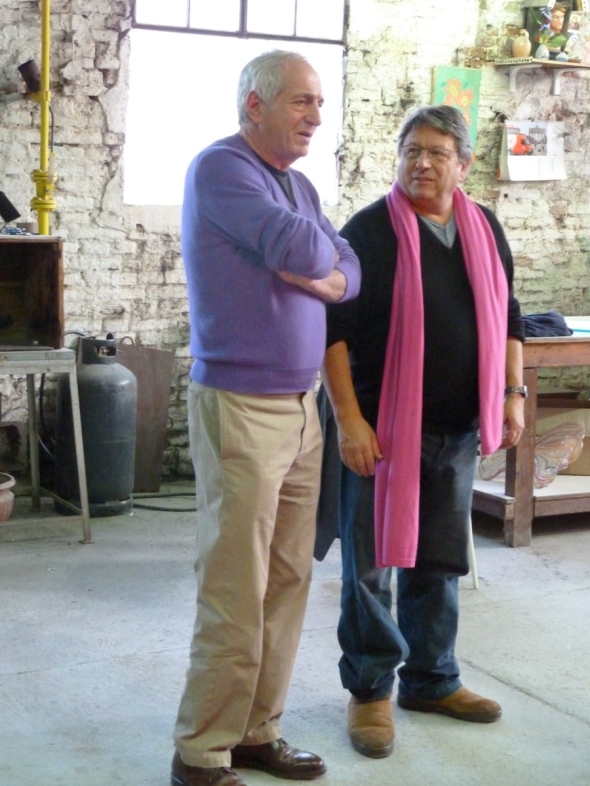 Earlier this month, Paul Cocksedge, and Louise Campbell stopped by for a visit to Berengo Studios to discuss their upcoming exhibits for Glasstress 2011.

About Paul Cocksedge
Reflecting on abstract painting and its place in contemporary society, Paul Campbell explores abstraction’s most poetic, frankly beautiful aspects, while opening up the nearly century-old practice to up-to-date, aleatory experiments with wry techniques and an intensely felt rhetoric of painterly process. Eschewing the politics of “touch” which were the cornerstone of Modernist abstraction, Paul Campbell marks his carefully prepared oil and wax canvases with such every day objects as ten cent string, tennis balls, and remote-control cars, letting the careening traces of paint build up a rich and controlled chaos. “I use just about anything I can to paint with,” Campbell has said about his direct, rhythmic, yet extremely fine-tuned method. “It is a way of getting away from my hand to liberate the painting, a combination of a methodological and intuitive painterly approach.”

About Louise Campbell
Louise Campbell was born in Copenhagen in 1970. Being the daughter of a Danish father and an English mother, she grew up and was educated in both countries. After graduating from the London College of Furniture in 1992, she returned to Denmark and continued her studies in Industrial Design at Denmarks Design School, graduating from here in 1995. She set up her own studio in 1996, from where she has worked independently since. Focus is on furniture and lighting design, but the studio is increasingly involved in product design and interior design projects as well. The client list is long and varied, including companies such as Louis Poulsen, Zanotta, HAY, Royal Copenhagen, Holmegaard, Stelton, Muuto, Interstop and The Danish Ministry of Culture. Louise Campbell’s work is playful and experimental, and is increasingly gaining a reputation for gently twisting not only every day objects and situations, but also materials and manufacturing processes in new directions.

Luckily, today at Design Miami, the prolific Michael Joo was able to stop by our booth for a visit. As a Glasstress 2011 artist, this was one of the first times he and Venice Projects director, Adriano Berengo got to exchange ideas for Michael’s Glasstress exhibition! MAGICAL! You’ve gotta love when Adriano gets excited and animated… it’s infectious. Plus Susan Scherman leaves with a signed final sketch!